Any chef worth their salt will admit that beloved recipes leave just enough room for improvisation and interpretation. Like recipes that feed the body, great Christian melody feeds the soul, and Seattle horn man Rulon Brown is dishing up flavorful classics. His new EP, Rejoice, updates the recipes of four 19th Century Christian melodies with dashes of global-rhythm and a zest of pop. 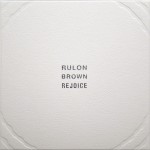 Ross Hauck, the founder of the Sacred Music Foundation, declares, “[Rulon] defies description or category. I’m going to call him an ambassador of Christativity… Christianity and creativity together.”

Rulon dedicated Rejoice to the Christian community, though he has spent most of his musical life making secular improvised music and working in Latin, Irish, Jazz and musical theater settings. “One Sunday it hit me,” says Rulon. “The hymn I was singing the same way over and over ever since I was kid was just one of the countless interpretations people had made of that melody through the ages. This thought hit me with such force, I knew it was the Lord telling me to put my talents to work, join the conversation and glorify Him.”

“It’s such a thrill to work with songs that are seven-generations older than you,” says Rulon. “Melodies like these are so wise and tough that you can’t damage them. If you respect their tone and message, they teach you what they taught others before you.”